If there’s one thing the atheist sophisticates know that they know, it’s  there’s simply nothing worthwhile at the Creation Museum.  Just a bunch of rednecks and rubes clinging to their Bibles, and of course, it’s the lair of their arch bogeyman – the Bible apologist par excellence Ken Ham.  Of course, according to this same crowd, the Smithsonian is everything the Creation Museum is not — worldly, sophisticated, and relevant.  While this atheistic dogma is unfounded – the Creation Museum is nothing if not sophisticated, world-class, and full of dogma-challenging formation – the atheist’s prejudice made for some humorous theater this weekend. 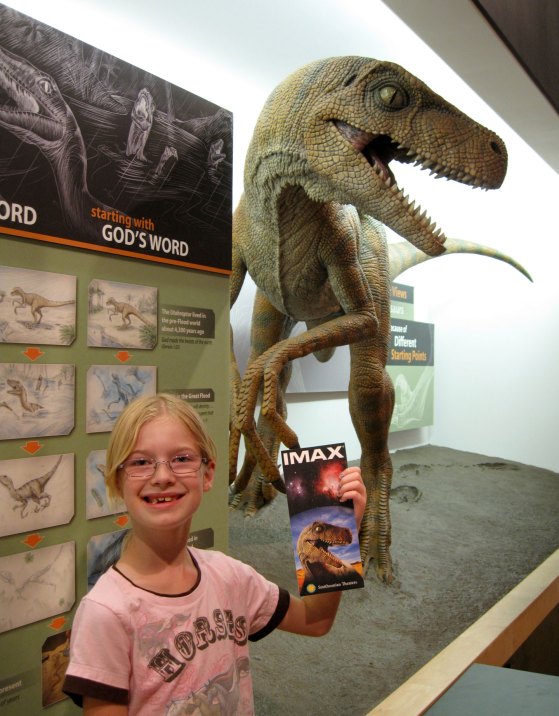 Ken Ham reported on his blog this weekend:

I’m not sure what the Smithsonian thinks of this, but the militant atheists are already “sighing” and gnashing their teeth over the implicit recognition of the quality of Creation Museum displays from an institution they respect and hold dear.  I think Ken ought to offer the Smithsonian a KEN HAM signatured copy of the raptor for them to use on all Smithsonian marketing, free of charge.

Thanks to Mark Remy at Runners World blog.

We welcome Lila as the new dog in our family. This was the inspiration for her name:

Of course chocoloate chip cookies are not the perfect food.  Only cheeseburgers, the big warm bun with a huge hunk of meat, can make (and have made) claim to being Heaven on earth with an onion slice.  If there were, however, runner-up awards for culinary perfection, chocoloate chip cookies would warrant consideration.  To wit:

In case you missed it, the Marathon world record was broken or shattered last Sunday at the Berlin Marathon.  See here.  Patrick Makau ran to a new world record of 2:03:38.  That calculates to an average 4:43/mile pace!

You have to read the commentary on the record here!

More from ReasonTV: “We may not be able to address our current debt ceiling woes, but we can at least put them to a good beat.”

From Dima Kotik  at Truthonly.com and friends, a modern adaptation on the history of Jacob, Rachel, and Leah:

For an insightful, interesting and serious commentary on the same story, see Richard S. Strauss’ Never Satisfied! – The Story of Jacob and Rachel.

My top-10 list of lessons I learned from coaching swim team this season.

10. You don’t know it all. The minute you think you have it all figured out, something is going to make you look really dumb.

6. There are no rest areas between Cary and High Point.

5. The most encouraging away meets are at schools with the same mascot. Everyone cheers for you!

4. Make sure you have enough room for everyone at practice.

3. Don’t be afraid to push for the next level. You will be amazed at what you can accomplish!

2. Don’t forget why you are there.

1. Remember: you are not alone!

If still interested, look for schools and organizations with mentors who understand the intersection of Christianity and the law, both in practice and in jurisprudence.  See for example here, here and here.

There is a great article on Runner’s World here.

This article chronicles the experience of an experienced runner attempting his first triathlon.

Some of my favorite quotes from the article:

“I was already a decent if casual cyclist, and as for the swimming, well, all kinds of folks swim a good distance without drowning–so why not a runner in marathon shape? … ‘You’ll find out,’ said my Wise Inner Voice, and then it went off to spend the summer with somebody more inclined to listen to it.”

“Pool swimming is as different from open water as running on a treadmill is from running from a hungry bear.”

“Legends are full of heroes who unknowingly pick up the instrument of their own destruction, but rarely do they pay retail for it.”

“My legs complained at the strain, feeling both stiff and soft. They felt as if I had swapped my legs for someone else’s…I was pretty sure I could do the distance. I just didn’t know whose legs I’d be using to do them.”

Personal note: I was thrilled with my 52 minute PR for the 10K run leg of an Olympic Tri.  This guy did a 43 minute split on the run leg for his first ever tri.  That is why he gets to write the articles and I end up reading them!

Pork Board Admits It Knows Unicorns Don’t Exist, But Claims It Doesn’t Matter.