Now, in the last chapter of his life, Daniel was once again pressed into service for the king. The new king, Darius, set up new leaders over the country with Daniel in charge. Instead of finishing his days in peace, Daniel faced the resentment and jealousy of colleagues who are angry that an outsider was promoted above them.

Don’t miss an important point in this chapter – very little of the action was by Daniel. There was no dramatic show of wisdom nor dream interpretation in Daniel 6. Daniel simply remained faithful to God through the chaos of his world.

This aspect about Daniel is what makes this passage especially encouraging. Daniel faced intrigue, politics, lies, and laws that challenged his fundamental beliefs. Yet through it all, he simply followed God. Constantly. Faithfully.

Daniel’s rivals scoured through his long history to find any “dirt” on him, yet his record was clean. They ended up resorting to a religious law which required everyone to pray only to the king for 30 days. The flattered king signed it into law, with no idea that he had just set the trap for Daniel.

Daniel responded to the anti-prayer law by going to prayer. Daniel would not allow his relationship with God to be blocked by the laws of men. This relationship was the basis for Daniel’s entire life.

Daniel’s prayer served as sufficient ammunition for his enemies, who had Daniel arrested at once. The penalty was to be eaten by hungry lions. The king himself tried to save Daniel, but the law was clear.

Note that Daniel did not speak in his own defense. He was ready to die.

The execution was carried out. Daniel was taken at sunset and put into the cave of hungry lions. The door was closed and sealed, and everyone went off to bed.

The king could not sleep that night and hurried to the cave in the morning. Daniel claimed to serve a very powerful God, but could this God save Daniel? The king was anxious to know if it was possible!

Somewhere, from inside the cave came the voice of an old man. God had sent an angel to stop the lions because Daniel was blameless. The king joyfully brought out Daniel and ordered his accusers to be executed in his place.

The passage concludes with an edict from the king. All people everywhere are to tremble in fear before the God of Daniel. He is the living God! His kingdom endures forever and he acts to save those who truly worship Him!

God will save all who trust Him, although the rescue may not be as dramatic as Daniel.

God may also save us through His providence, where He causes circumstances to come together for our rescue. This was the case of Joseph and his brothers, when God put Joseph in in Egypt during the famine (see Genesis 45:5-8). This was also Ezra’s belief when he refused the king’s protection for the return back to Jerusalem (see Ezra 8:21-23).

God may also save us through death. God’s plan is not always to rescue everyone at once; some will only be rescued when they see God face to face. This was the thought of the writer of Hebrews when he spoke of the martyrs for the faith in Hebrews 11:35-38. They are described as, “of whom the world was not worthy”.

What Daniel teaches us about God

END_OF_DOCUMENT_TOKEN_TO_BE_REPLACED 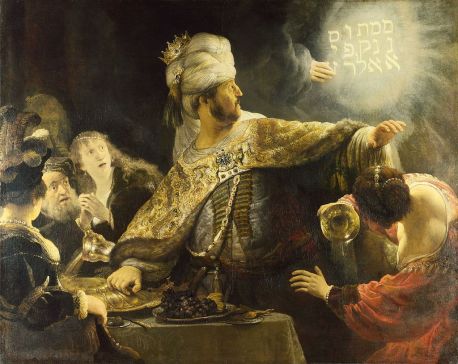 What will be your final warning?

As I studied the account of the final king of Babylon, several words came to my mind. How would you describe this man?

The part that scares me is how much these words also describe me.

It is easy to look down through history and criticize king Belshazzar. He was a classic fool and he paid dearly for it. He lost his kingdom, his empire, and his life.

But before we look more closely at Belshazzar’s final days, we need to be sure that we are not guilty of the same failures. At the core of it all, Belshazzar knew about God. He knew all about Him, yet he chose to reject God.

The Most High God holds our very breath in His hands, yet we do not honor Him!

“…the God in whose hand is your breath, and whose are all your ways, you have not honored.” – Daniel 5:23

The scene in Daniel 5 opens up to a great party. It has been over 30 years since Nebuchadnezzar’s dream in the previous chapter (see here). Nebuchadnezzar has died and there is a new king in Babylon. Daniel is now an old man and has retired from serving the king.

There is also a new enemy outside the city gates. The Medio-Persian army has conquered every nation in its path and has come for Babylon. The king of Babylon fought against them and completely lost. He was captured and his army was destroyed.

The king’s son and co-regent, Belshazzar, was still in control of the city. Babylon was the greatest fortress in the world, and he knew that the Medes and the Persians could never get inside. They have plenty of water and enough food to last for 20 years! They can simply wait for the Persians to leave.

At the time of Belshazzar’s party, the Medio-Persian army has been camped outside the city of Babylon for four months!

Daniel’s God had given the king a message. He told the king three times that the kingdom of Babylon would end and that it would be replaced by the Medes and the Persians. The army outside the gates would win.

God had also given the same message through other prophets. Both Isaiah and Jeremiah prophesied that Babylon would fall to the Medes (see here and here). Isaiah’s prediction was over 200 years earlier!

Belshazzar knew what God had said, but he felt safe inside his city walls. In a final act of defiance, he threw a great party. As he began to get drunk, he called for the holy vessels of this God of Jerusalem. He drank from the golden cups of the temple and offered them to his Babylonian gods.

Immediately, the fingers of a human hand appeared, writing mysterious words on the wall next to the king. It terrified the king! He called for his wise men, but they could not understand what was written.

In the midst of the confusion, the king’s mother arrived and offered good news to the king. There was a man who served his grandfather who had the “spirit of the holy gods” and could explain great mysteries. Surely this man—Daniel—could interpret this mystery to the king.

Daniel came at the king’s request. He first reminded the king of his grandfather Nebuchadnezzar. God brought Nebuchadnezzar low, making him live like an animal when he became proud (see here). Belshazzar knew all this, yet he refused to humble himself before the Most High God. He taunted the very God who holds his breath!

This was one last chance for Belshazzar to repent, yet he refused. He awarded Daniel with the honors of interpreting the writing, sent him off, and resumed his party.

The Medio-Persian army had diverted the waters of the Euphrates river. Unknown to the drunk Babylonians, they lowered the water level and waded under the river gates, into the city. They found king Belshazzar and all of the leaders of the city at the party and killed everyone.

The account in scripture puts it bluntly, “That very night Belshazzar the Chaldean king was killed.” (Daniel 5:30).

Previous post: How Big Do You Think You Are?