Not being big fans of pagan Celtic rituals, witches and goblins, or of copious consumption of cheap candy, my wife and I are always less than enthusiastic about Halloween.  We enjoy our children’s imaginations and encourage them to dress up and pretend, however, Halloween is just soo dark and gross.

In recognition of and support for the church’s past efforts to convert this pagan holiday to All Saints Day, my wife and I challenged our four children to each select a “saint” to write about today.  They each picked a famous Christian, with the youngest picking first. Several of our children wanted to select our nation’s most famous martyr, Nate Saint (1923-1956). Our five year old selected him with the first draft pick. Fitting that Saint was our first saint selected. One of the founders of Wycliffe Bible Translators, Cameron Townsend (1896-1982), was picked second. Amy Carmichael (1867-1951), the Irish girl who wanted blue eyes, but whose brown eyes allowed her to serve as a missionary in India for 55 years, was third; she saved countless girls.  In response to a letter enquiring what missionary life is like, Ms. Carmichael responded simply, “Missionary life is simply a chance to die.”  The Reformer Martin Luther (1483-1586) for whom we should celebrate October 31 each year was selected by my eldest. I hope to write soon regarding my “pick.” Following are the All Saints Day reports written by our children, ages 5, 7, 10, and 11:

Nate Saint was a missionary in Ecuador who was very brave. He told the Auca

indians about Jesus. Auca means “savage.” Mr. Saint had a bright yellow airplane. The Auca indians really liked him. Then one day they got mad at Nate and his friends. They killed him and his friends.

Then the Auca women invited Nate’s sister named Rachel to live with them. She told them about Jesus just like Nate had and they listened to her! They became Christians and were baptized! I think this story is sad because Nate and his friends were killed but I also think it is happy because the indians became Christians.

I think we should celebrate Saints Day instead of Halloween because Halloween was started with the Celts thinking that dead people came out of their graves on Halloween and they had to dress up as scary as they could to scare away the ghosts. Then the missionaries tried to turn it into a holiday called Saints Day to celebrate the saints and missionaries. But then people didn’t listen and started celebrating Halloween again.

As a boy, Cameron Townsend loved to figure things out.  He was nicknamed 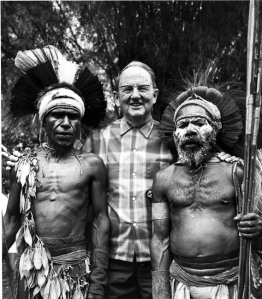 Cam. Life was not easy.  He helped his father farm.  They were poor but well fed. They thanked God for their lives and they worked hard.

Their father read the Bible to them. They sang hymns and prayed.

In college, Cam had the opportunity to give a Bible to people in need in the Guatemalan countryside.  When he gave a Spanish language Bible to a native villager, the man said he could not read Spanish.  The man then asked if your God is so great, why can’t he speak my language?

From then on, Cameron dedicated his life to translating Bibles for people who had never had Bibles in their native languages. He also taught them how to farm and care for themselves.  The President of Mexico helped him.  Cameron started Wycliffe.

your sins would be forgiven. Then he said your dead relatives in purgatory will also go to heaven as soon as you dropped that coin into the bucket. Then all the people ran forward and dropped all the money they had into buckets and ran home excitedly. One of those people didn’t run home; he ran to his friend who was a Christian monk named Martin Luther and told him how he freed his relatives and how his sins were forgiven.

Martin Luther was very mad at the pope so he made a list of 95 reasons why the Catholic church was wrong to do that and nailed his list on a church on October 31. Then Luther published the reasons and told a bunch of people about it. Lots of people believed him and Luther wrote lots of books. Then the pope brought Martin Luther to court. Luther said if they showed him in the Bible where he was wrong he would burn all the books he had written. Lots of people got mad and chased him out of the court house. Then some men on horses ran out of the woods and rescued him and brought him to a old castle where he translated the Bible into German so people could learn about Jesus.

When he was 67, Luther got sick and died. Martin Luther was a saint and I think we should celebrate Saints Day instead of Halloween because Halloween was started with the Celts dressing up as bad and as nasty as they could because they thought that ghosts came out of graves and would haunt their bodies so they had to scare them away buy dressing up scary. The saints tried to change Halloween to a Christian religion but it didn’t work. In Austria people still leave bread and water out to welcome dead people back for Halloween. In Sweden they celebrate all Saints Day. There are lots of other countries like Austria that honor their dead relatives for Halloween but Sweden celebrates all Saints Day instead of bad things.

One day, a little Irish girl who loved sweets, was sitting in a tearoom by a window eating small cakes and drinking tea.  She noticed a hungry little girl about her age looking through the window.

Amy’s memory of the girl just wouldn’t go away. She thought that God had a plan

for her because she couldn’t forget that girl.  Little Amy felt very sorrow for that girl and decided to write a note saying, “When I am older, I will build a safe place for little girls.”

A long time passed and Amy loved to go on walks. She usually invited local children to her house to sing, clap, and dance and she would read them Bible stories. One morning Amy decided to visit the local Irish slums. She passed out bread and read Bible stories. She felt sad for all the sights of poverty around her. She saw a girl with blue eyes, Amy had always wanted blue eyes instead of brown. The girl was dressed in rags so Amy gave her a piece of bread. She looked so pale and was so small. A women with a shawl instead of a hat, came by a picked up the girl. The women turned and walked away. As she turned, the shawl fell from her face. Amy gasped, surprised.

The woman looked so worn and bent, but SHE was really quite young. Amy discovered this women was known as a “shawlie”. Shawlies covered their head up with shawls instead of hat because the hats cost to much. Amy felt sorrow. It wasn’t long after that visit with the “shawlie”, when she came up with an idea. She began to do a Bible study for the poor, in her own church. But many people in her church did not like that idea. They told Amy that these shawlies would come in their church with dirt, lice, and fleas. Amy did not care what other people thought about the shawlies. She would love, care, and help them like God would want her to. A couple of years passed and Amy’s work soon grew very big. She had a bigger building planned, and made so she could have singing, Bible studies, prayer, and sewing clubs in the building.

Things soon changed for Amy. Her family had to move to England. But she did not know that God had a plan for her to tell more people from different places about him. It was hard for her to leave her family and friends, but she knew God was with her and he would never leave her. When she arrived in India, she learned the Hindus worshiped idols and gods. The rich ladies wore silk but Amy chose wear white cotton like the poor. She told them about Jesus and how nice he was. She told them to burn their idols and love Jesus.

Most Hindus disliked Amy. They also disliked her God. But one girl, named Arulai, chose to like Amy. She would sneak out of her house and meet with Amy when her family didn’t know. When her family found this out, they forbade her right away to see Amy ever again.

After months, Arulia was able to get to Amy again. She quickly ran to Amy but when she got there she was very weak and sick. She slept in Amy’s bed, so sick she could hardly speak. Her father came to take here back to their house but then he found she was too weak and sick. For a long time he came and visited his daughter. Every time he came he found Amy being loving and kind and caring for his daughter. So, when Arulia was healed, her father let her stay with Amy for as long as she wanted.

Another girl, who was Hindu, decided she would like to be Christian and not tell anyone because if they knew she believed in the stuff they hated, her life could be in danger. After three years, she decided she would have to find her way to Amy’s house. At evening, she crept outside, tiptoeing across the road. Soon she saw a Christian banner in sight. “That is probably Amy’s house.” she thought to herself. She came up to the house and knocked on the door, and  Amy let her in, just like she had to the other girls who wanted to be a Christian.

Now, since most of the Hindu girls were becoming Christian, and going to Amy’s house, they locked them up in the Hindu temple and made them work instead of play. One girl’s father died and her mom was too weary to take care of her and had to send her to the temple saying, “At least you will be fed.” The girl was only five and named Preena and at the temple at night she felt very sad and cold. She was never able to go outside or see her mom. Because Preena was not loved, sometimes she hid and cried.

Finally she was able to escape and see her mother. But when her mother saw her she said, “You cannot stay here. Go back to the temple.” The Hindu priests punished her and taught her to obey. But Preena kept dreaming of being free from the temple.

Two more years were passed and Preena was still at the temple. But one day she overheard some people talking, saying there was a woman who lived nearby. Her name was Amy. She was a Christian and was helping other Christian girls to become more like Christ. She heard the people say how this lady was willing to help girls who had no good place to live. So Preena thought to herself, “I wonder if I could escape and I wonder if I escaped if Amy would help me.” So, at night, she crept through the temple, being careful not to make a sound. She tried the door, it was unlocked. So she tiptoed through the streets to find Amy’s home.

She went to the church, and found a women who would help her find the Christian lady, Amy. Being carful for danger, the two set out in search for Amy’s house. Soon they found it and Amy was sipping English tea, with a smile on her face. Her smile looked so loving that Preena felt safe, and at home. She felt so safe, she climbed right on Amy’s lap.

Amy loved those children and saved them just like she had promised as a child.